Two trucks were laid on for cardboard only to ensure recovery and recycling, from the various stalls etc.

Anne Sullivan, the Greening co-ordinator from Waterford County Council, arranged lots of volunteers to help out and, despite the high winds they managed to have a litter free festival and a very high level of recycling.

Waterford County Council’s encouraged all participants at the Festival to BeGreen by providing 10 recycling stations in addition to the existing bins throughout the festival during Saturday and Sunday. A three tier bin system similar to Waterford County Council’s Refuse Collection was implemented on the street in Dungarvan during Saturday and Sunday. All bins were clearly marked with the new generic bin labels approved by the BeGreen programme; Brown bin for food waste, Grey Bin for general waste and White Bin for recycling bottles and cans only. Each recycling station was manned by volunteer’s students and clubs from Mercyhurst, Build a Skate/BMX Park Committee Dungarvan, Dungarvan Tidy Towns, Dungarvan Rugby Club, Teens ’n Jeans Youth Club Ardmore, Ard Scoil and Abbeyside Girl Guides , Dungarvan Hill walking Club, Pitch & Putt Dungarvan. Well done to all the volunteers who helped festival goers use the right bins. The feedback from the festival was very positive and there was great praise for all the volunteers.

Over 20,000 people participated in the festival over 3 days. http://www.waterfordfestivaloffood.com/ 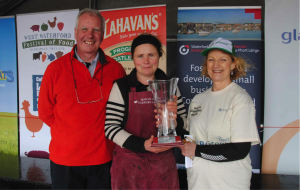 The “Be Green award 2012” was presented by Anne Sullivan Education and Awareness Officer to Annie’s Roast from Cork. This award was adjudicated by the Environmental Health Officers who stated that they are a family friendly run business, food cooked to an excellent hygienic standard. They also segregate all their waste. (This award is retrospective as Environmental Health Officers are unable to give result on the day).

Well done Anne and all at West Waterford Festival of Food. 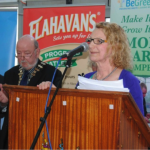 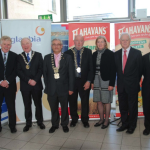 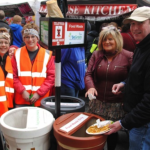 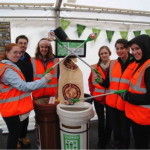 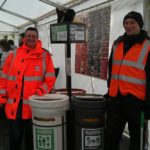