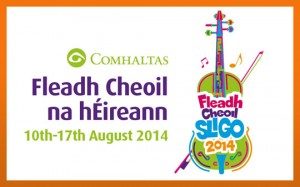 Sligo County Council has greened Fleadh Cheoil Na hÉireann Sligeach in 2014 and 2015 with a huge array of activities and programmes.

The aim of Green Fleadh 2015, an integral part Fleadh Cheoil Na hÉireann Sligeach 2015 was to build on the success of Green Fleadh 2014, which was awarded Highly Commended in the Green Festival category of the Responsible Travel & Tourism Awards 2014.

This generated a real feel good factor which made people proud to be from Sligo and encouraged more people to volunteer every day. The Green Fleadh had its own logo and all initiatives were very well branded with a common ‘look’.

The initiatives were as follows: 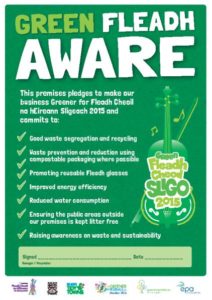 The partnership approach involving the Fleadh Executive Committee, Sligo County Council, the Sligo Business Community, Sligo Tidy Towns, Every Can Counts, the Recycling contractor Barna Waste and the Sligo Community in general, was key to the success of the Green Fleadh initiative in 2014 and the same base model was used in 2015. There was a real feel good factor being involved in the Green Fleadh 2014 and this carried on into 2015 – everyone wanted to be part of it. The visibility of the initiatives throughout Sligo encouraged the public to do the right thing – use the recycling stations and recycle as much as possible. 400,000 people (350,000 in 2014) from all around the world came to Sligo from August 09 – 17 for the biggest Irish music festival in the world and Sligo Town was spotless throughout. All organisations mentioned above were part of the ‘Green Fleadh Committee’, who put all the initiatives in place, beginning the planning process in the Summer of 2013, 1 year before Fleadh Cheoil na hÉireann Sligeach 2014.

While Green Fleadh 2014 was very successful, and generated a real feel good factor for the people of Sligo, there was room for improvement in 2015. A lot of lessons were learnt in 2014 and initiatives were tweaked in 2015 to enable improvements to be made. One of the disappointments in 2014 was the low percentage of waste recycled (15%) so the target for 2015 was to double this figure. Some new initiatives were also introduced in 2015 including the promotion of compostable packaging and the facilitation of bicycle hire at all campsites. The following are the 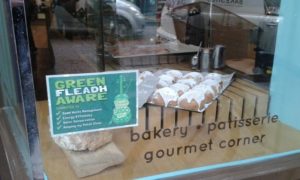 The Green Fleadh Aware Campaign was successfully introduced in 2014 to encourage businesses, to be as environmentally sustainable as possible, in particular in the area of Waste Management. In 2015, we continued this initiative and more than doubled the numbers of participating businesses. It was a great opportunity to visit premises, with a focus on the Hospitality sector, and talk to management and staff about their waste management and energy practices. A Seminar for the Hospitality Sector was also held to educate and advise on ‘Greening your Fleadh’ which included tips on energy, water and waste minimisation, waste segregation and recycling with an emphasis on the use of compostable products. The response from the businesses was excellent with 54 hotels, restaurants, cafes and bars, up from 20 in 2014, pledging to commit to the following initiatives:

On signing up to the Green Fleadh Aware programme each business was given a ‘Green Fleadh’ logo sticker to put up on the premises window along with the signed pledge for the inside wall. . This initiative really worked in minimising waste and encouraging recycling, and businesses put good practices in place which are for the longer term not just the for the week of the Fleadh.

Use of Compostable packaging

The following condition was put on the Street Traders who were selling food or drinks:

While not all Street Traders complied with this condition, it brought an awareness of the use and benefits of Compostable Packaging. Working with Street Traders on being more environmentally sustainable is certainly an area which needs more time and attention.

60 Recycling Stations with receptacles for Dry Recyclables, Food Waste, Aluminium Cans and Residual Waste were located at all Fleadh venues, campsites and City Centre locations. The target was to maximise recyclable and compostable waste and to minimise residual waste at each festival location and to make it as clear and easy for the public to do so.

In 2014, the public visibly recycled throughout the week but because of some contamination, the percentage by weight of clean recyclable material collected throughout the week was just 15%. This was disappointing and a huge effort was put in to the planning and execution of the 2015 Festival to improve this figure. The target was to double the percentage of Recyclables collected in the public areas in 2015. We were thrilled to learn that we exceeded our target and recycled 118% more than in 2014 and reduced our waste to landfill by 33%, with 50,000 more people in town! The following initiates were put in place in order to achieve this:

All initiatives added to the significant improvements made in 2015, but the effort of the Green Team was exceptional. Throughout the week we had approximately 300 Green Team volunteers from Tidy Towns, local Sports Clubs, local businesses and the general Sligo Community. People took time off work in order to be part of the Team. The volunteers were scheduled from 9am – 11pm each day, and had a very visible presence with purple tee-shirts and branded high-viz vests. The role of the Volunteers was to keep Sligo clean and to encourage Recycling. This was implemented as follows: 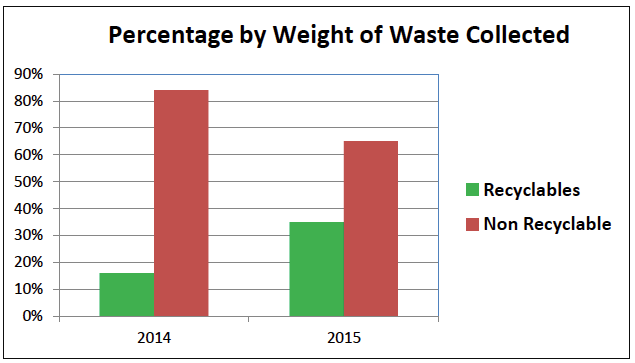 A real eye opener in 2014 was the number of tents left abandoned in the Campsites. This year, the Green Fleadh Team partnered with the Sligo Boy Scouts Organisation to collect for reuse all the tents that were abandoned. As well as reducing the landfill waste, the Scouts were delighted with their new equipment – a lot in very good condition.

In addition to the Shuttle Busses which ran every 20 minutes to and from all Fleadh Venues, campsites and City Centre locations through the week of the Fleadh, bicycle hire was introduced this year. The Green Fleadh Team partnered with four bicycle Hire Companies in Sligo to provide Bicycle Hire at all Campsites and at a Central City Location. Families in particular availed of this initiative. 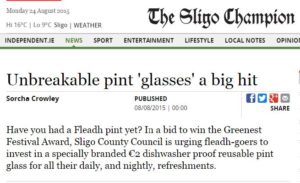 There was a full programme on the Fleadh on Nationwide, broadcast on Monday 10th August 2015. The Green Fleadh featured strongly in the programme which can be seen via the link below (Minutes 4:15 – 6:20)

The success of the Green Fleadh over the past two years and the tangible improvements made in 2015 has energised all involved and the wider community in Sligo. It really gave a sense of pride to people being involved in such a positive initiative for the good of the whole community. The Green Fleadh Committee is staying in touch and have used the experience gained from the Green Fleadh experience to draw up a template for use for all future Festivals in Sligo. The will is there and it is being harnessed. This is not the end!