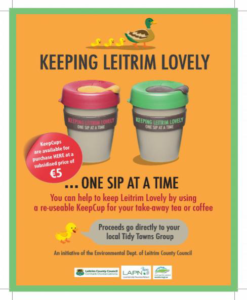 Leitrim County Council have developed and distributed a branded Re-Useable Coffee Cup to encourage positive behavioural change and reuse. Discarded paper coffee cups are one of the most commonly picked up pieces of litter during by the 60 Adopt a Road Groups in the county.

990 KeepCup were purchased and distributed to Tidy Towns Groups in Leitrim in April, 2016. The 18 Tidy Towns Groups were each given a supply of cups and accompanying promotional posters to promote in their own towns and villages.

The individual groups liaise with their local Coffee Shops and Filling stations and negotiate discounts for people presenting these cups for take-away teas and coffees. They are priced at €5.00 and to date there has been a huge interest in them.

The local newspaper – the Leitrim Observer, gave a huge amount of coverage to coverage to the Launch event on 12th April. The local authority also ran an advertisement on two consecutive weeks.

Anton Savage from Today FM was presented with one of the cups on his recent visit to the area – Friday 29th April, 2016.