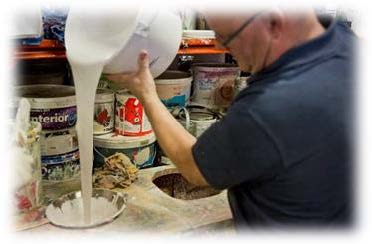 Dun Laoghaire Rathdown (DLR) County Council has worked on a project to prevent hazardous waste, through the reuse of paint.

The DLR project involved a partnership with the Rediscovery Centre in Ballymun and focused on reusing paint. The Rediscovery Centre runs a paint reuse project ( Rediscover Paint) whereby unused water-based paint is collected, remixed to bespoke colours and resold. This diverts a potentially toxic and polluting waste and provides quality paint at low prices to individuals and communities.

Over a four month period in 2015, the project collected reusable paint from civic amenity (CA) sites and then promoted and sold the paint at a Rediscovery Centre stall at the Marley Park market each Saturday over a 15 week period. The idea was that customers would pay a small daily membership fee and this would entitle them to 10 litres of paint. The project was advertised in local free sheet media and through social media. While the numbers of customers taking out membership was low, the project did make contact with 650-700 people about the idea of reusing paint.

Over 16% of all paint purchased goes unused; stored in garages all over the country or simply disposed of. In Ireland in 2013, 685 tonnes of waste paint was collected at civic amenity sites in the Eastern and Midlands region of which 102 tonnes came from Ballyogan Recycling Park in Dún Laoghaire –Rathdown. Operational since 2007, Rediscover Paint works to reduce the impact of waste paint disposal and to provide paint for reuse to local residents and community organisations. Whilst providing a reuse service for the public, Rediscover Paint also provides valuable workplace training for those displaced from the workplace through a community employment initiative.

A wide ranging media and social media campaign was implemented to increase involvement in the project and to maximise its impact.

Whilst the project operated an active web-based PR campaign, more could have been achieved with respect to printed media, local newspapers and direct marketing to local interest groups.

Paint is not an impulse buy and customers can take months to follow up an enquiry with an eventual purchase.

The majority of people were not aware that emulsion paint could be reused nor that it was being collected for reuse at the Ballyogan Recycling Park.