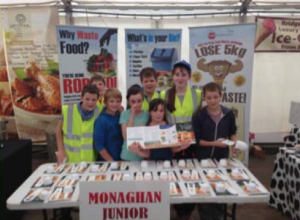 Junior Tidy Towns manned a stand during the festival and distributed a “Taste of Monaghan Leftovers Cookbook” which was prepared by Monaghan County Council. Other items such as spaghetti measures, rice cups and information on the “brown bin” for food waste were also distributed. 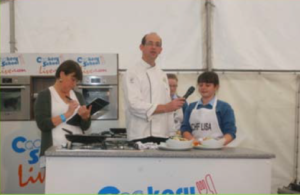 A Transition Year (TY) “Stop Food Waste, Cooking with Leftovers” competition was held on the first day of the festival. 3 out of the 5 schools in the town participated, with over 150 students along with 7 teachers attending the competition. 5 finalists (who were picked from a leftovers recipe that they had submitted beforehand), cooked a dish on the day. The dish was then judged by a representative from Stop  Food Waste and a winner was declared.

All agreed that this was a great idea and was very informative and entertaining, and it was especially worthwhile to have so many young people involved. This competition was only possible as Taste of Monaghan had provided a cookery demonstration area with 5 workstations.