Three LAPN related initiatives have been nominated for environmental awards, giving due recognition to the great work being done in the programme.

Thomond Park Stadium has been shortlisted as a finalist for a Green Awards 2011 in the Entertainment and Leisure Category.

They have also launched their Community Fund which will include sponsorship of local environmental and waste prevention awards. They also took part in Earth Hour 2011. 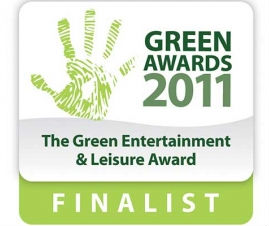 Galway County Council has been shortlisted in the Local Authority category of the 2011 Green Awards.

This is in recognition of all the great work being done in Galway over the years to protect the local environment.

The Limerick Clare Kerry Regional Waste Management Office organised a Batucamob to be held at the Cliffs of Moher, Co. Clare on Saturday November 20th 2010.

This was part of the European Waste Reduction Week (EWWR) initiatve and the event was nominated as a finalist (out of over 4,000 initiatives) for a 2011 EWWR Award where it won a special commendation.