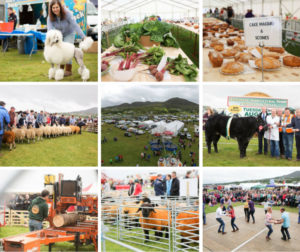 Donegal County Council (DCC) has been involved in the greening of two events in the county in 2016: The Clonmany Agricultural Show and The Inishowen Food Festival.

DCC worked with the Clonmany Agricultural Show committee on implementing some greening steps for its show this year. The show took place on Tuesday 9th August 2016 and combined the agricultural show and food festival. Over 4,000 people attended the one day show.

DCC set up an exhibition space in the food marquee and an on stage demonstration space to promote the Stop Food Waste Campaign.

CTC supported DCC in carrying out a waste audit to create a benchmark for future activities.

With support from DCC, two Catering Companies helped to green the event using delph and real cutlery for the sit down meals instead of disposable materaila.

A number of Public Recycling Stations were available at the event, for the first time.

DCC secured support from ALUPRO to promote the separation and collection of al cans. Clonmany Tidy Towns have also committed to supporting the Greening of the festival and will collect the cans, supervise the recycling stations etc. 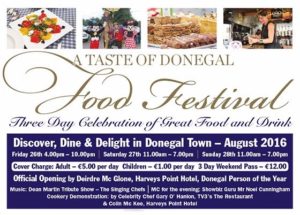 “A Taste of Donegal” Food Festival

CTC supported DCC in carrying out a waste audit to create a benchmark for future activities.