The focus of this project is to redistribute food, which may potentially end up as waste from supermarkets and other food producers and redistribute it through the St. Vincent de Paul network in Kerry to families in need.

More than 1,500 families in the greater Tralee area required support from St Vincent de Paul (SVDP) during Christmas 2013. SVDP now spends more than €85,000 in the area during the holiday period.

The number of people in crisis has risen by more than 38% in recent years. Despite this, Ireland it is estimated that almost one million tonnes of food is wasted annually – much of which is not actually food waste but is better described as surplus food. This is food that, as a consequence of modern food production, distribution and stocking does not reach consumers. 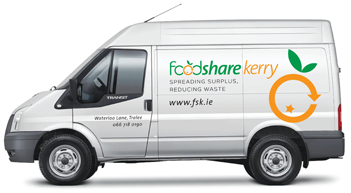 Foodshare Kerry was set up to combat this problem by redistributing where possible surplus food from local distributors and retailers to families in need.

It is hoped to expand the project outside Tralee to other parts of Kerry. Further such developments in other counties is also possible and would be worthwhile, learning from the lessons learned here. One of the main lessons learned is: the importance of refining the supply/demand chain when dealing with certain food types cannot be under-estimated. Managing the timing of food arriving and being redistributed is a work in progress and varies hugely from supplier to supplier.

Further information about FoodShare Kerry is available from its website: www.fsk.ie