The issue of disposable/single use plastics has garnered national and international attention in recent years. A recent government funded study estimated that up to 200 million single use coffee cups are used in Ireland every year and these are not recyclable, that is 22,000 cups every hour. The Co-Cup Scheme aims to reduce this figure by implementing a deposit and return scheme for reusable cups in Dublin.

The pilot project which is funded LAPN and run by 2GoCup Ltd will initially be rolled out in a number of locations including campuses at Dublin City University, Trinity College Dublin and in Dublin City Council’s Civic Offices. 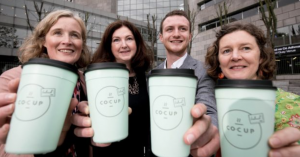 Under the pilot scheme when someone purchases a tea/ coffee, there is an additional charge of €1 – a deposit for the cup and when they return their cup they get their €1 back. A lid can also be purchased for €1, which can be kept and re-used.

Fionnghuala Ryan, Executive Environmental Scientific Officer, Dublin City Council said” The City Council is delighted to be involved in this exciting pilot project. With funding from the EPA’s Local Authority Prevention Network, Co-Cup hopes to be the beginning of the deposit and return revolution in Ireland. We want to prove that it can be done and to drive behaviour change.”

The President of Dublin City University, Professor Brian MacCraith commented “I’m delighted that two of Dublin’s universities, one young and one not so young, are coming together with Dublin City Council to provide a leadership example for our shared city. The Co-Cup initiative is an innovative and practical measure that will enable every citizen to play a central role in reducing waste and contributing to sustainability. Solutions such as this will also help DCU to achieve its commitment to become the first university in Ireland to phase out single-use plastics.”

Michele Hallahan, Sustainability Advisor, for Trinity College Dublin commented “This is a truly a collaborative project between Trinity College Dublin, Dublin City University, and Dublin City Council and very much in keeping with Trinity’s Disposable Plastic Plan and other Circular Economy initiatives which contribute towards a more sustainable campus. The climate crisis needs to be addressed through collaborative rather than competitive forces, and this is a collaboration we’re delighted to be involved in.”