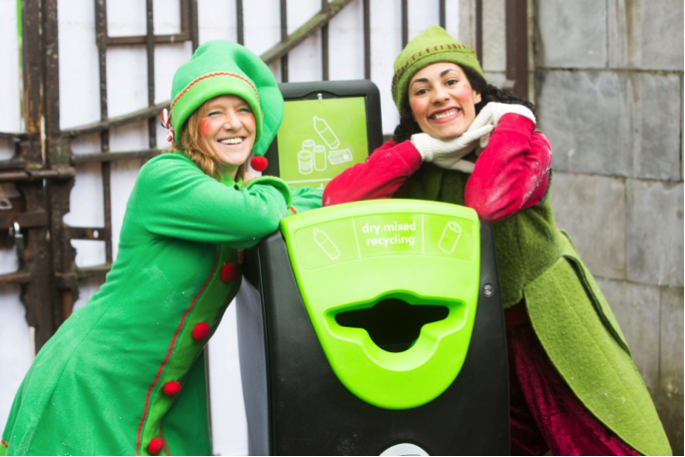 Cork City Council has greened the annual Christmas GLOW Festival in the city.

GLOW is a major festival celebrating Christmas in the heart of the city, in the Grand Parade area in the weeks coming up to Christmas. Tens of thousands of people visit GLOW annually, and with many food stalls and other outlets, large quantities of waste occurs.

The aim of this project was for the local authority to prevent waste and to increase segregation, leading to improved levels of recyclingn and composting and a reduction of waste to landfill.

Cork City Council carried out a wide range of comprehensive activities beforehand and during GLOW to ensure its success.

A campaign of consultation with many of the stakeholders took place first. This involved researching new bins – using the three bin approach (residual, recycling and composting), procuring bins, as well as designing and developing signage and suitable bags. Consultation with the traders was vital to ensure bringing them on board. The waste contractor had to be fully informed of what was planned, as were all the staff and volunteers involved in running the festival, including the street cleaning staff of Cork City Council.

The project was a great success, with a very high level of awareness raised, and the profile of the greening of the event was very evident throughout. A PR Consultant – was engaged to organise a photoshoot, a facebook campaign and a radio interview. Large advertisements were designed and put in place – including signs built in to the barriers used to control pedestrian traffic on the streets. Two Green Elves were employed who would be present at the festival and who would interact with people and advise them on which bin to use – this was a great success and the Green Elves had a huge profile and engaged widely with visitors. 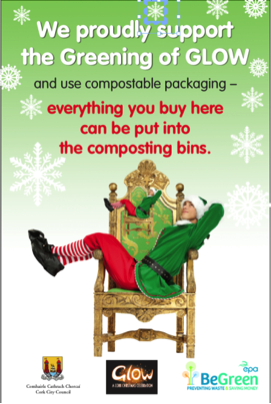 The most striking outcome of the initiative is that the proportion of waste going to landfill decreased from 82% in week 1 to 60% in week 4. In total 2.08 tonnes of waste was diverted from landfill over the 4 week period. As well as the environmental benefit of diverting waste from landfill, the cost of treating compostable and recyclable waste is also less than the cost of disposal to landfill.

The initiative generated widespread media coverage especially in the Cork Independent where it was featured weekly. It was also covered in the Evening Echo, Cork City Council’s Arts Newsletter, Cork Chamber’s Newsletter and social media sites and was communicated to all members of the Cork Business Association.

Cork’s 96FM and C103 aired an interview with Mary Walsh, Environmental Awareness Officer several times over the course of the weekend December 2nd to December 4th. It was also mentioned by various DJ’s during the four weeks of GLOW.