An Siopa Glas, located in the village of Ballon in County Carlow, was set up by the local community improvement group in 2012. Staffed by volunteers, income goes towards different projects in the community. Aside from selling various donated items, other activities by An Siopa Glas include taking waste materials from local businesses to make items to sell in the shop, selling produce from the local school garden, and holding fundraising events for local charities and sporting organisations in the shop. For example, waste wood from a nearby sawmills is transformed into picnic tables, bee hives, display stands etc.

The shop is a great source of waste prevention and a reduction in local materials being sent to landfill. Fashion materials, books, old furniture, baby items, household goods, DVDs, CDs, unwanted presents, toys, and bicycles are among the many hundreds of items that have passed through the shop, been up cycled, repaired or upgraded and sold to customers. 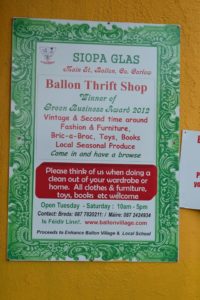 An Siopa Glas is closely associated with the local primary school which helps with awareness raising and the development of new projects. And the proceeds from the shop go towards improvements in the local village such as new footpaths and planting.

This is the first year of this TidyTowns special award sponsored by the EPA which aims to recognise communities that have undertaken activities to prevent waste and use resources efficiently. It was a great success with many very worthwhile projects being submitted from all over Ireland.

For more information about how LAPN works with Tidy Towns click here. 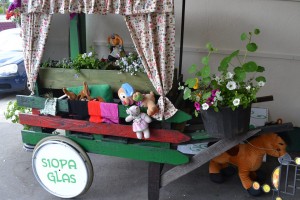 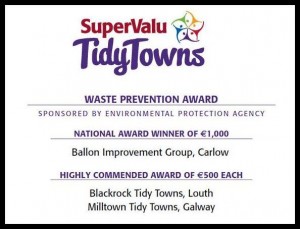