The projects undertaken by Clare County Council in 2015 had a broad reach and presented an opportunity to promote extensive engagement across many sectors to promote behavioural change including: the greening of festivals a reusable water bottle project workshops to raise awareness on resource efficiency & waste prevention. Building on the popularity of running events […] 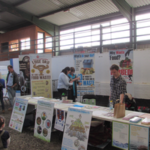 Clare Garden Festival in Ennis went green again in 2014 with a great turnout and many initiatives. Stop Food Waste and Maintaining your Septic Tank were the 2 main messages at the Environment stand.  Two of the local Master Composters, Maureen and Jean helped out.  Donal O’Leary (Stop Food Waste) and Joan Tarmey (Clare County Council) had […] 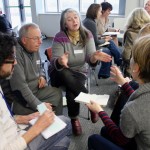 Sustainability Training Course in Clare in May

A full day workshop was held in Ennis on the 10th of April that explored how we might nurture our communities to be healthier and more sustainable. Over 30 people from different community initiatives from across the county attended the session, which was organised by Clare County Council and held at the Áras Contae an […]

The Green Christmas Campaign kicked off in Clare today with a very well attended awareness raising event in Áras Contae an Chláir in Ennis. There were many interesting stands on display showcasing the up-cycling of old materials, local crafts and local foods and a fine display by the Clare County Council Environment Section. Pasta measures […]

Limerick Clare Kerry Regional Waste Management Office as set up an Eco Pledge Programme for people to make a pledge to improve their environmental behaviour. Sometimes we feel overwhelmed by environmental issues and helpless to do anything about it. The Eco Pledge system makes it easy, people can choose an action that they can easily […]

The Cliffs of Moher visitor centre (which has worked closely with the Local Authority prevention Network and The Limerick Clare Kerry Regional Waste Management Office) has achieved the 3-Star Eco-certification through the Sustainable Tourism Eco-Certification Program (STEP). This thorough, independently audited Eco-certification is awarded by Sustainable Travel International to tourism businesses around the world who […]

Three LAPN related initiatives have been nominated for environmental awards, giving due recognition to the great work being done in the programme. a Thomond Park Stadium has been shortlisted as a finalist for a Green Awards 2011 in the Entertainment and Leisure Category. They have also launched their Community Fund which will include sponsorship of […]

The Limerick Clare Kerry region participated alongside other European regions with a local “BatucaMob” at the iconic Cliffs of Moher, Co. Clare. The Cliffs of Moher are project partners with the LCK region on the local authority prevention network. Right across Europe the “BatucaMob” event was a symbolic and unified action of people coming together […]