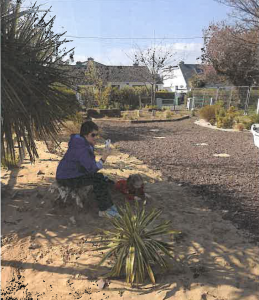 During the drought of the summer of 2018, Arklow Tidy Towns felt the pressure of maintaining the floral displays in planters and beds around the town centre, with volunteers drawing water from the river in the evenings and dragging it around in containers. This led on to some changes for 2019, the group reduced the number of planters and hanging baskets, and developed the following project, for which Arklow Tidy Towns won a prize in the Tidy Towns special award for waste prevention.

Arklow Tidy Towns carried out a renewal of a green space in the town that had become dilapidated. The redesign was carried out using xeriscape principles – the process of landscaping that reduces or eliminates the need for irrigation. The aim was to show that such a garden could still be pleasing to the eye and a beautiful and quiet oasis. The redesign involved eliminating the turf lawn, installing a large rainwater collection butt, much use of mulch and gravel, added organic matter to better retain moisture, use of drought friendly plants while also keeping some of the original shrubs. Rainwater from the tank is fed directly to the roots of the plants via a drip feed hose laid below the soil surface and run at a very low setting.

As Arklow Tidy Towns states “water is a limited resource and needs to be managed in a conservative manner, not just in planters, containers and hanging baskets, but in the bigger landscaped areas like parks and public green realms”. Arklow wants to highlight for organisations and individuals that wish to put a green space in their area to think water efficiency in their planning and design. This garden demonstrates how it can be practically and aesthetically carried out.

Arklow highlights the advantages of xeriscape gardens to include: 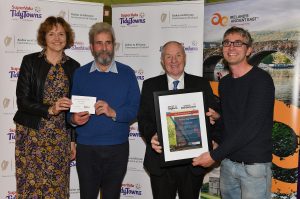