These pages showcase “waste prevention” ideas, and some examples of what local authorities and communities in Ireland are doing.

From its inception, the Local Authority Prevention Network (LAPN) has been working with local communities to support waste prevention. Now we are making available to Tidy Towns Committees and Other Community Groups, many different examples and case studies of waste prevention initiatives in the community.

The ideas and examples in these pages are especially useful for inspiration for the EPA’s Special Award for Waste Prevention.

The award is open to ANY community group (not just Tidy Towns).

Waste prevention is any initiative to reduce waste, water use, energy use or use of materials. This can be something done by the Community, Homes, Businesses, Schools, and Festivals with your local authority or other organisations.

Pick a topic of interest to see what you could do. 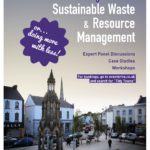 See the presentations from a conference hosted by Monaghan County Council on the Tidy Towns category “Sustainable Waste Management & Resource Use” (or SWARM):